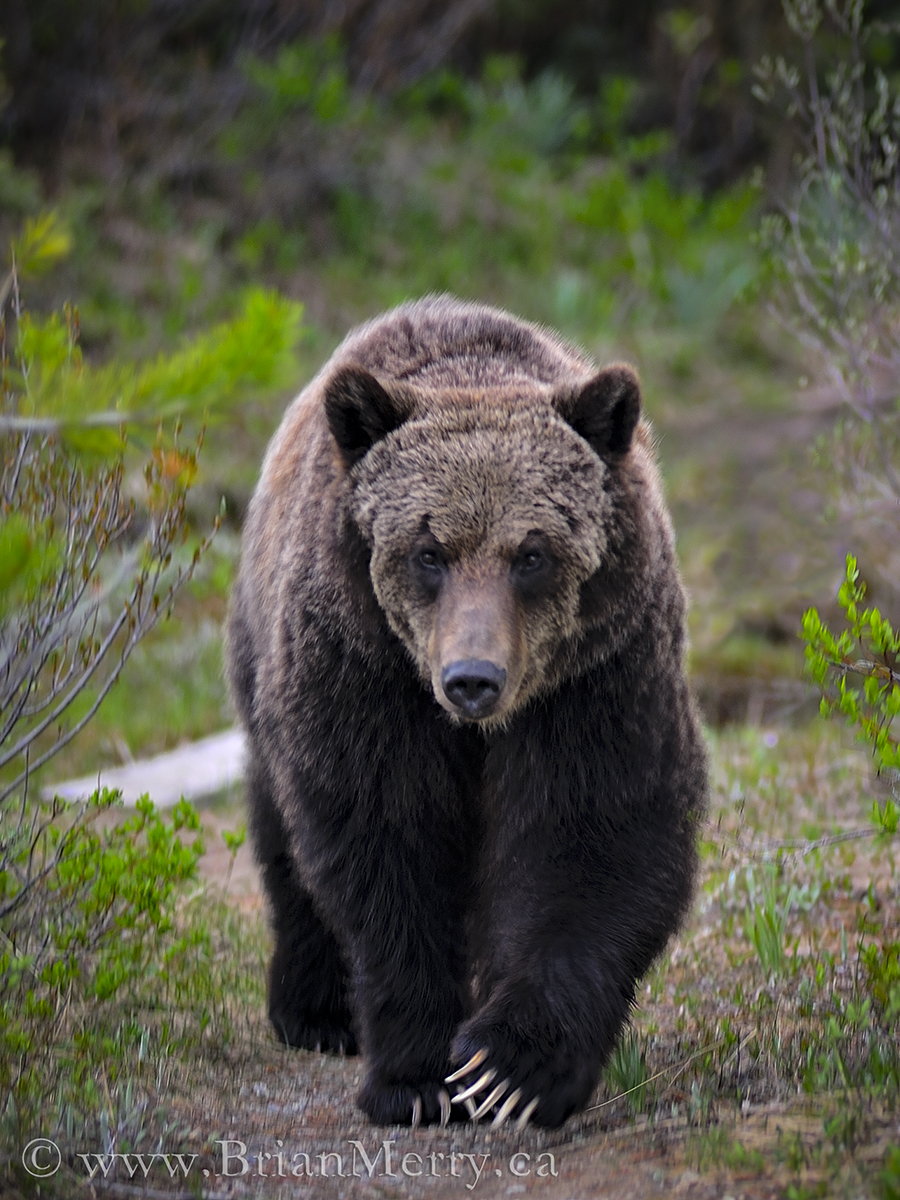 A Close Call with a Pair of Grizzly Bears

I had an interesting grizzly bear encounter on Thursday, June 27, 2018. My wife, Kazue, and I were backcountry camping at Norman Lake near Sunset Pass in Banff National Park.  Norman Lake is a little South of the Columbia Icefields and a few KMs East of the Icefields Parkway.  It was a nice day in late June in 2018.  Suddenly, as we were finishing up dinner not one, but two grizzly bears appeared in the mountain meadow in front of us about 150m away and began walking straight towards our campsite.  And, the distance between us was closing uncomfortable fast.

for some excellent advice on

what to do when you encounter a bear

So, what do you do when two grizzly bears

are walking towards you and they haven’t seen you yet?

You yell at the Grizzly Bears, of course!

We kinda didn’t have much of a chance to avoid an encounter with this pair of grizzly bears.  They were heading directly towards the point of trees we were camped in on the edge of the meadow.  So, I decided to confront them because they hadn’t seen us yet and there was still about 150m (500 feet) of distance between us and them.  If we had done nothing they would have been in our camp, or walked right beside it in less than a minute. I really didn’t want to be that close to two grizzlies in the backcountry either…

I walked out from the edge of the trees where our campsite was so the pair of approaching grizzly bears could clearly see me and I started yelling at them. The big one stood up to investigate.

That was a BIG Grizzly Bear!

He was BIG! Probably 7 to 9+ feet high. He was a really big boy! The other grizzly was a little smaller, but it was a big bear too.  The smaller grizzly bear was probably a female since Spring is breeding season for grizzlies in the Canadian Rockies.  After seeing the larger bear stand up, the slightly smaller bear took off sprinting to exit the meadow to the left.  She didn’t want to have anything to do with us.

When the big grizzly saw her leave he decided that he had better follow her too and he took off after her at full speed. Man, grizzly bears can run really fast when they want too.  I estimate they were running at least 3-4 times faster than I can run.

Did I Manage to get a Wildlife Photograph of the Advancing Pair of Grizzly Bears?

Nope!  I didn’t get a photograph of these bears during this encounter.  I was honestly more concerned about managing the situation well enough so I would see tomorrow’s Sunrise than I was about getting a photograph.  Lol!  Just kidding.  Well, sort of…

Luckily the bears were good grizzly bears.  They didn’t really want to have anything to do with us either, and took off once they noticed that we were already in the clump of trees that they were heading directly towards.

That’s another crisis averted in the backcountry.  I apologize for not having a photo of the big grizzly standing up on his hind legs to take a good look at us.  That was a very impressive sight to see.  But, I was completely focused on managing the situation and didn’t even think about taking a photograph.  The photographs of the bears I’ve included in this post are different bears that I photographed in previous years.

The lead photograph in this post features another big bear that I encountered in Jasper about five years ago.  The bear I saw last Thursday was larger than the bear in the photograph.

Living in Banff makes me feel so alive!

After the encounter I simply went back to drinking my apres supper coffee and chilled out by our campfire.  The tense situation was over as quickly as it had developed.  The bears now knew where we were and I was fairly confident that they weren’t going to come over to investigate our campsite any farther.

I revealed myself to these two bears because I really didn’t have a safer escape route or an avoidance alternative.  I’m definitely not recommending that people should go out looking for bears to challenge.  That would be, well, stupid.  And, that practice will probably end badly eventually.

I’ll say again that I confronted these two bears because I didn’t have another viable escape or avoidance option.  Letting these two grizzly bears know that I was in their path was my best option to avoid a more dangerous encounter.  And, it worked.  I’m convinced that bears don’t want to hurt people, for the most part!

Enjoy the Canadian Rockies.  They are beautiful.