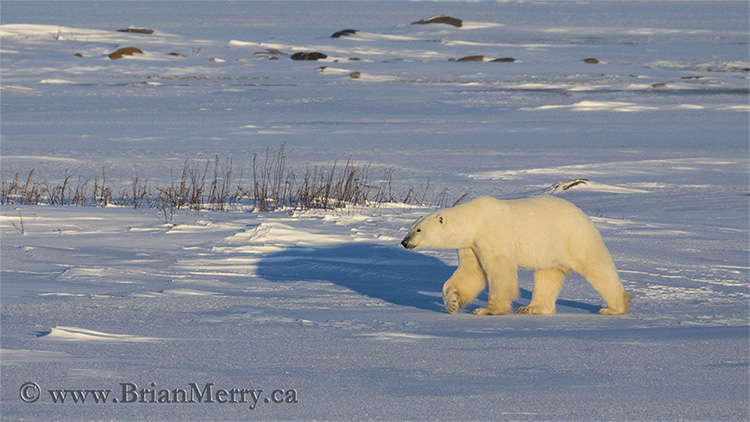 Last Fall I was graciously given the opportunity to help lead the Polar Bear Photography Specialty tours in Churchill, Manitoba for Frontiers North Adventures.  It was a great a experience.  I’m grateful for the opportunity to photograph about 60 beautiful polar bears in about 130 different encounters.  They are so beautiful and curious.  I dare say that they are even cute.  But that cuteness is only my own anthropomorphic impression.  Polar bears would happily have me for lunch if they were given the opportunity.

I photographed this particular individual early in early November 2017.  He was quite a beautiful bear and I remember this particular session very well.  I had been up in Churchill for a few weeks already and I had already photographed dozens of bears.  I started to think about what I could do to fill up my “hit list” of Polar Bear Wildlife Photography images.  One of the iconic photos that I decided that I wanted to capture was two polar bears sparing, aka “the dance of the polar bears.”  Polar bears sometimes spar, or box each other to establish and reenforce their dominance.  I wanted capture “the dance of the polar bears” at Sunset.  Sunset at this high latitude lights up the landscape and is composed of a yellowish orange light.  That would help to create a beautiful photograph.

But, time was running out.  I had a limited amount of time to photograph polar bears last Fall.  I was feeling that time was running out for me to get “the shot.”  After all, I was flying back to my home in Banff in a week after being on the road hosting and leading photography tours across the country for nearly two months.  Fall is a busy time for me.  But, luck was moving in my direction.

As this beautiful bear walked across the frozen tundra pond above I knew that I was witnessing a beautiful scene.  I had my shutter speed set high to avoid camera shake and my “image stabilization” turned off to maximize my chances for a sharp image.  In this photograph I wanted to communicate the feeling of the cool isolation and the hungry patience of these bears.  I wanted to communicate the lonely isolation in the beautiful landscape in this photograph.  This is why I choose to crop it 16:9 to accentuate the lonely journey of this bear.

However, just out of the frame in this photograph is another bear.  After a while they met and stood up to spar for a moment.  And, I got some shots as they sparred with each other for a few seconds.  But, the Sunset light had past and I got them sparing in cool blue hour light instead.  I didn’t get the exact photograph that I was looking for so, I guess I’ll just have to go back!

If you’d like to learn more about the plight of Polar bears  and what populations are doing well, and what ones are threatened, then explore the Polar Bears International, PBI, website.   PBI is the public outreach group researching polar bears and the challenges that the species faces moving forward .  Learn from the scientists!