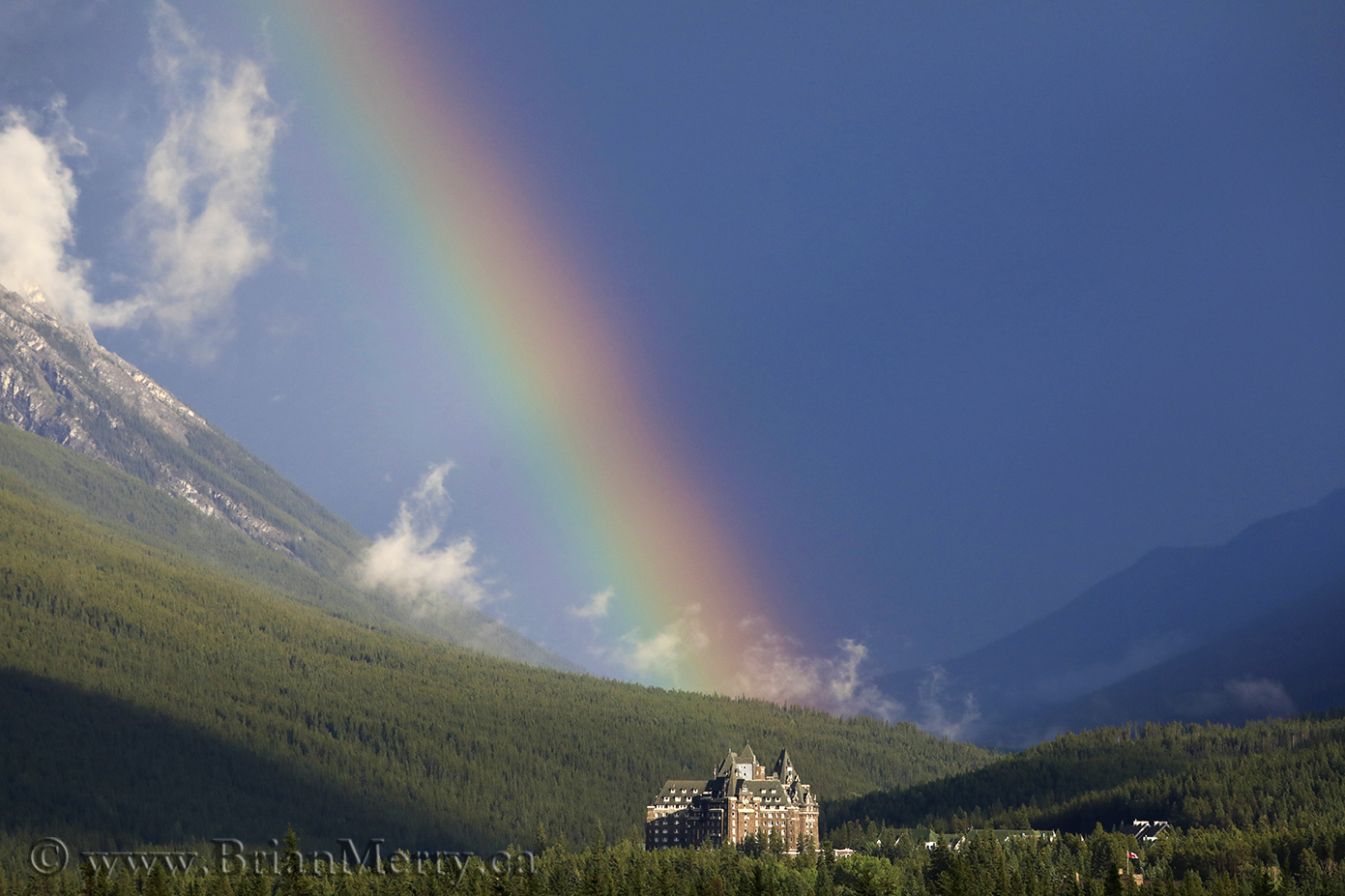 An example of the classic technique:  Pre Visualize the Perfect Landscape Photograph

and then relentlessly pursue it until you get it, Photographic Excellence achieved!

I moved to Banff a few weeks after completing my BScH with Honours in Biology from Acadia University. That was WAAAYY back in 1996 and I had only been photographing for about 5 years at that point. And, I was completely knew to the Canadian Rockies. The Rockies completely blew me away as I drove into them for the first time on April 18, 1996. I instantly knew that this new paradise I found was going to be an important part of my life forever!  And, I was eager to get out and explore, which I did in ernest taking a lot of photographs in the process!

The Inspiration and the Legend

To keep my expenses low in the busy little tourist town where I lived was to get a part time job at my local camera store.  I was able to start buying film and developing it at a discount.  Working at the the local camera store also gave me the opportunity to connect with all of the leading local pro photographers in the industry.  One local pro landscape photographer that I looked up, and still do today, was Douglas Leighton. His book photographed and wrote the best selling book called “The Canadian Rockies” in the early 1990s. His book was the strongest selling landscape photography book in the Canadian Rockies. And, it still holds a commanding spot on the souvenir coffee table bookshelves in bookstores today.

I scouted out the side of Mount Norquay and determined exactly where Doug stood when he captured his iconic photograph.  I researched the correct angle of incidence of sunlight striking passing summer rain showers and used that information to determine approximately where I had to stand across the valley from the Town of Banff to capture the photography that I wanted.  I discovered that to reproduce Doug’s photograph I had to be on somewhere on the switchback road leading up to the Mount Norquay Viewpoint high above Banff.  With further research I discovered the exact gravel pull out that Doug had used when he photographed his classic composition.

Now, I just had to wait for a rainbow in the landscape and practice “f8 and be there…”

I was still waiting for my pre visualized composition 20 years after I first worked out it out.  I knew how to get the right combination of sunlight, rain shower, and rainbow, all happening at around 5:00pm in a late July or Early August afternoon.   The years went by and they turned into decades.  And I continued waiting.

Then, Summer 2017 Arrived, 22 years after I arrived pre visualized this photograph in Banff…

Last Summer I happened to be driving back from a 4 day trip into Berg Lake in Mount Robson Provincial Park when I started to encounter rain showers in Lake Louise. As I continued driving past Castle Mountain heading home to Banff I could see another rainstorm coming over the Continental Divide near Sunshine Village. I was seeing the conditions developing for the shot.  And, I started to get excited.

I put the car on cruise control so I wouldn’t get too excited and get a speeding ticket. As I drove beside Vermillion Lakes close to Banff I knew the timing was going to be very tight.  It wasn’t a guarantee that I was going to make it before the rainbow disappeared, but I wasn’t going to speed. I wasn’t going to let a lapse in good judgement and a speeding ticket rob of the perfect shot!  I drove responsibly to ensure I would arrive in Banff as quickly and efficiently as possible.

When I exited the highway and turned left towards Mount Norquay I could see that I wasn’t going to have enough time to drive up to the same location Doug had been when he captured his iconic photograph. I quickly determined that I had to keep the angle of incidence to the rainbow the same and I decided to stand on the embankment beside the Juniper Hotel.  That was less than a minutes drive from where I exited the highway.  I should get there on time, maybe.

THE RAINBOW WAS HAPPENING RIGHT NOW!!!!

I drove up to the driveway to the Juniper Hotel and parked my car in the parking lot.  Without missing a beat I jumped out of the car with my camera bag it tow.  I sprinted over and behind the East side of the Juniper Hotel past the outdoor hot tub full of hotel guests. I heard some comments about why the rush, but I couldn’t stop to chat.  My shot of a lifetime was very close to slipping away.

I hastily put my camera backpack down on the ground and reached for my Canon 5D Mark IV.  I paused briefly when considering to put on my 16-35mm f/4L IS Canon lens, my 24-105mm f/4 Canon or my beautiful 24mm f/1.4L lens.  From previous scouting trips I knew that 30mm was about the focal length that I needed to frame the composition the I wanted it framed.  Humm, But I hadn’t worked out which lens I was going to use yet.

Slapping the 24mm f/1.4L on my 30MP 5D Mark IV I stood up to face what was developing to be a significant point in my photographic life.  I decided in a snap that I was going to use the absolute best glass in my camera bag.  I would slightly crop the image coming out of my 30mp Dslr camera to get the composition that I needed. The super high quality of the 24 f/1.4L was going to give me the best quality image possible with the least amount of lens flare, and I knew it.  I needed that rainbow to be sharp!  I understand my equipment completely so I don’t have to think about it when I use it.  My camera becomes an extension of my own personal expression.  My camera isn’t a tool.  It’s an emotional sensory and communication organ.

My camera is my sixth sense that I use to perceive and feel my environment without thinking.

My Camera is a part of who I am.

As I raised my camera I was trembling a little from the excitment.  I paused to check my camera settings and opened up my aperture a little bit to increase the shutter speed while shooting in aperture priority.  I knew that I wasn’t going to be able to stand perfectly still so I had to compensate with a faster shutter speed. As I trembled from the excitement I fired off a shot.

I knew in that instance when the mirror slapped that I got it.  I knew that I had just captured one of the strongest photographs of my career.  In just 1/250th of a second, 22 years of relentless pursuit was over!

I got a “once in a lifetime” landscape photograph.

I still admire Douglas Leighton’s photography.  He was locally the clear leader in landscape photography for over a decade.  The greatest contribution Doug gave to me was to me was to be open and willing to help others to become better photographers. This lesson has become a personal standard for myself.  Sharing has become an underlying principle in just about every part of my professional outdoor photography business.

I need to give back to the industry that has given me my exciting and long professional career in outdoor photography.  And, I feel like I’m just getting started.  I feel that I still have a lot to give back.  I’m looking forward to my next growth spurt as an artist.  My sharing is about to hit high gear!!!

I still practice previsualization in my landscape photography, and I still admire the Douglas Leighton’s book, “The Canadian Rockies.”  You can find and buy Doug’s book from Rocky Mountain books here.  And, I hope that you do.