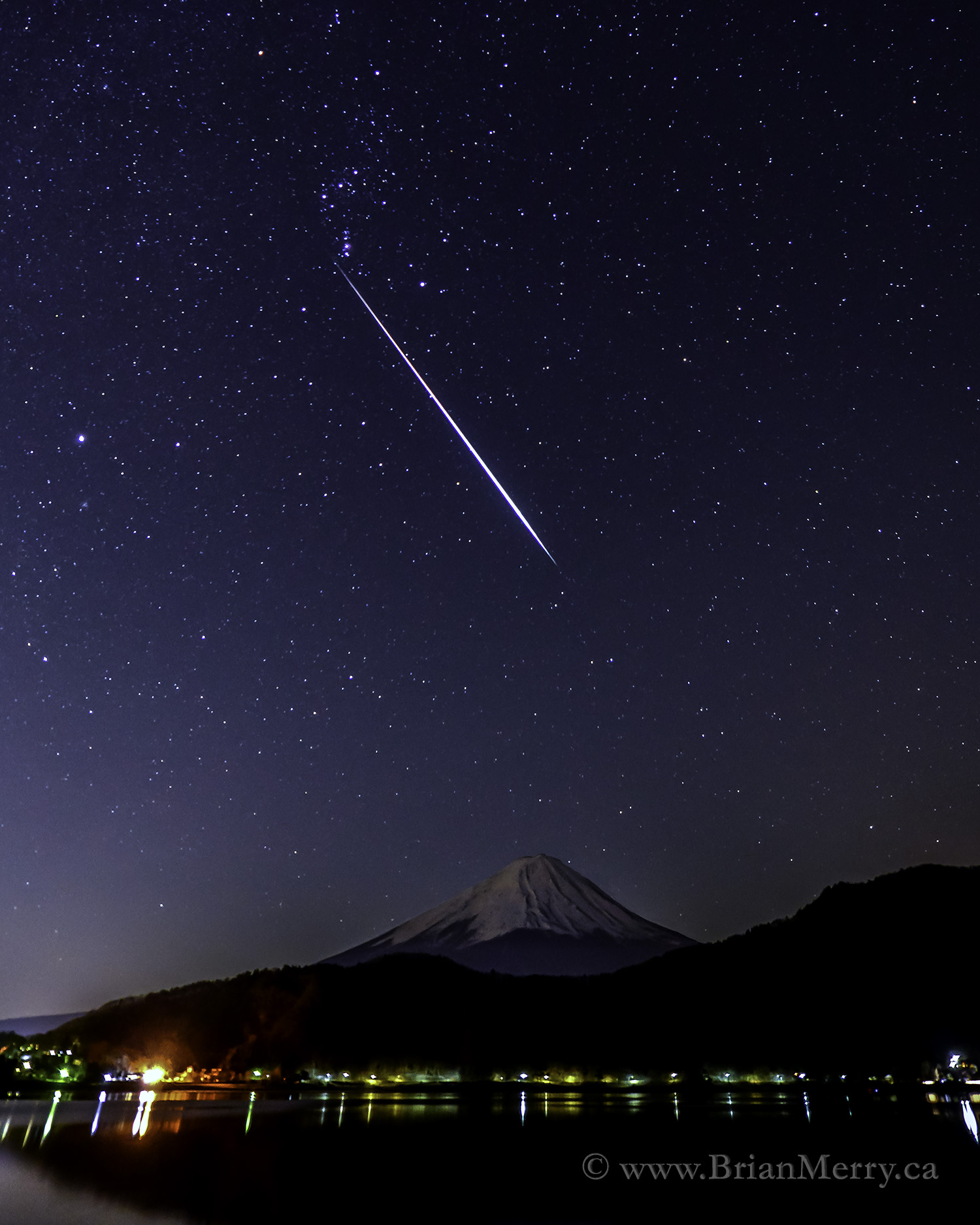 How to Photograph a meteor Shower Night Sky Photography

We’re in for a night sky photography treat tonight with the chance to photograph a meteor shower.  Twice a year our planet passes through the dust trial left by the last passing of Haley’s Comet and I have a few tips here to help you photograph the meteor shower when this happens tonight.

As a comet’s orbit passes through space close to the sun it leaves a bit of a dust trial behind in its wake that just stays floating around in space. This dust trial is sometimes affected by various gravitational pulls by passing large celestial bodies, like our planet. For decades after a comet’s has passed close to our planet that dust trial can collide with Earth at the same time each year. As the dust enters our atmosphere it burns off in the form of a bright, and sometimes not so bright, “shooting star”. When the planet passes through a large dust trial like the one left by Haley’s Comet, then a significant meteor shower can be the result.

Tonight, Tuesday night/Wednesday morning, is going to be one of those nights.  This presents a great night sky photographic opportunity for photographers willing to stay up to capture it.  We’re going to pass through this Haley’s Comet’s dust cloud tonight and we may be able to see this meteor shower and possibly photograph it. The moon rises in Alberta around 11pm so it might be good to get out before this happens because the light from the moon will make it harder to see the meteors and photograph a long exposure.  Here’s my advice how to photography a meteor shower night sky photography to help you get the most out of this photographic opportunity.  The Weather Network also has the details about when and where this is going to happen.

Exposure. This is obviously very important. A good exposure starting point for nighttime photography is 4-8 seconds, f/4 at ISO 2500. With these settings you will capture an image with some detail. You should make local adjustments based on the test image you initially capture. The idea here is that you want to exposure the night sky properly so “space looks black”, and you want the stars to show up as dots and not oval spots or even lines caused by the rotation of the Earth during too long of an exposure. At the above suggested exposure you’ll get a photograph that is pretty close to the right exposure with the wildcard variable being how much light pollution you have for man made sources like street lights. You can tweak your camera settings based on the test exposures you capture. You also need a dark place for these exposure setting to work. This leads into the second tip.

Qualities of a Good Location

You’ll need to find a good location for night photography. A good location for night photography would be one that has little or no light pollution from cities, towns and even well lit exits from street lights along the roadways. Some good places to view the night sky in Alberta include Banff’s Lake Minniwanka, around Pyramid and Patricia Lake north of the Jasper townsite, North and Northeast of Edmonton, East of Red Deer, Southeast of Calgary and Northeast or East of Lethbridge. Incidentally, Jasper has the honour of being designated as a dark sky preserve so practicing night photography there has the potential to produce some beautiful photographs. I suggest using Google Earth in satellite mode to find an area that has little settlement and one which has little or no nighttime lighting. Once you’ve identified possible locations you should check them out before the meteor shower is expected to arrive to make you final location decision.

Make sure you have a sturdy tripod to mount your camera onto. A tripod that has a hook on the bottom of the center post is useful to hang a camera bag from to steady the tripod/camera setup farther. You don’t need much weight to hang from the hook. About 10 to 20lbs, 5-10kg, should be good. Also, don’t cheap out on the tripod head that you put on your tripod. An entry level tripod head may not be steady enough to prevent all of the camera shake from the mirror slap and any wind that may be present. The added weight to the tripod helps to steady the camera in a moderate to strong wind and the head helps to negate the vibration from mirror slap produced inside of your camera when you trip your shutter.

With a simple remote trigger you have to press the shutter whenever you want to take photograph. Then you just have to repeat that action each time you want to take a photograph. Using an intervolometer is better. With an intervolometer You set the device to trip the shutter at a pre determined set interval and then you don’t have to touch the camera after that. That is, if you set the intervolometer to open the shutter every 9 seconds and the exposure set on your camera is for 8 seconds, then your shutter will be closed for only 1 second between exposures and you won’t miss much. This is the preferred tool for photographing meteor showers.

These Steps in Action

In my photograph of the meteor over Mount Fuji in Japan I was lucky enough to have the shutter open for the entire length of the meteor’s 3 second entry into our atmosphere. But really, I suppose I shouldn’t say that photograph was lucky. I did all of the steps I outline above and it paid off. Let me explain.

In 2012 I was planning a trip to Japan to visit family and do some preliminary location scouting for my Japan Photography Tour. A friend on facebook also reminded me that the Geminid meteor shower was going to happen while I was there.  I had previously known about the Geminid Meteor shower but forgot that it was going to be at its peak in December while I was scouting for my future tour there. Knowing this I was able to move the dates of our visit to Mount Fiji to coincidence with the forecasted peak of the meteor shower.

I had pre-visualized a photograph that would speak powerfully about Japan and the meteor shower. I decided that capturing a dizzying array of meteors over Mount Fuji in a single image would be exactly what I wanted.  But that didn’t work out exactly as I had planned.

I arrived at Mount Fuji 4 days before the peak of the event and Kazue and I started to do a reconnaissance all around the mountain during the days and nights leading up to the peak. We discovered that even though Mount Fuji is about 150km from Tokyo the light pollution from the city is still too much for night photography on the Eastern and Southern sides of the mountain. We covered hundreds of kilometers scouting the area for our future Japan tour and for the expected peak of the meteor shower. Oh, and did I mention that during my research of the meteor shower in Japan I discovered that the bulk of the show was going to be low on the SE horizon so we had to find a location on the North or Western side of the mountain to capture what I was after.

The hard work paid off. We discovered basically only two locations where the light pollution was manageable enough to get usable night photographs of the Mountain. With a bit more pre-planning I picked the location on the Northwest side of the mountain that put the North Star behind Fuji San so I could form an arch of light over the mountain. The photograph above is the result of all this planning and it’s an example of how good preplanning and practiced night photography skills can come together to produce a good photograph. I wish you all the best tonight capturing meteors and in all of your future night photography projects. You can find more photograph tips and suggestions by “liking” my facebook page too.